This year for my birthday, I decided to go apple pie picking.  I know some people are probably saying “what’s that?” I’ve had a few people guess that it was picking apples to then make pies with.  That is not correct. You see, most of the apple houses and orchards in North Georgia make fried apple pies. So, my wife and I loaded up in my truck and hit up five such places to pick their apple pies.

Let me say that it had been a good year and the apple pie orchards were ripe for the picking this year.  Below is a quick synopsis for each of the five places that we went to with a rating scale associated. I gave ratings out of 5 apples.  Some of the judging criteria was on crust, filling, and taste. 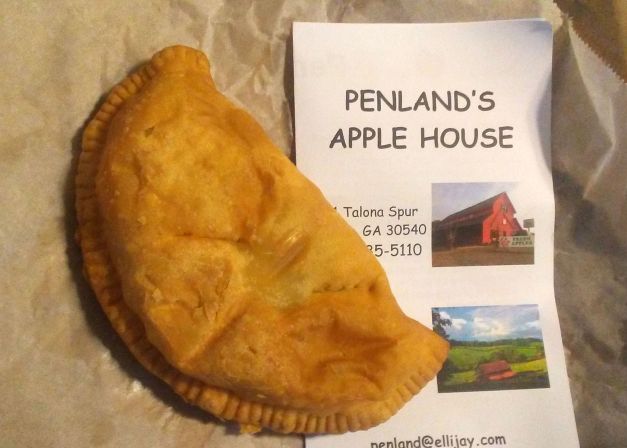 That is a fine looking pie isn’t it?

Penland Orchards has a buttery crust that is not too flowery and gives the impression of standard apple pie crust.  The filling was tasty, with hints of cinnamon and not goopy as most store bought apple pie filling tends to be. All in all this pie harvested 3 out of 5 apples.

Our second stop was directly across the street at Panorama Orchards (63 Talona Mountain Rd, Ellijay, GA 30536).

How’s this pie strike your fancy?

Panorama Orchards had a very pretty crust from the get go, a nice golden brown (as you can see from the picture).  It is puffy, flaky, and buttery. It does not taste like standard pie crust, almost tasting like it is made from a batter as opposed to a dough.  The filling did not have any of the normal pectin blended goop that accompanies pie filling. It has a good flavor that included cinnamon, nutmeg, and other spices.  The apples inside were nice and soft. This pie and Panorama Orchards harvested a 4.5 out of 5 apples. 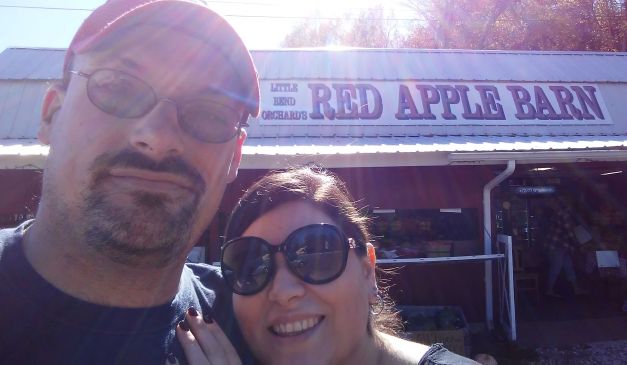 Penland and Panorama both made their pies onsite.  Because Red Apple Barn is strictly a store and does not have the equipment onsite, they make them at another location and then sell them at the apple house.

This was a very basic style crust, not overly buttery or soft.  The filling inside was your basic goopy apple pie filling. Because this pie was average, it only harvested a 2 out of 5 apples.

Didn’t get a picture of this pie.

The pie I had at R&A had a hard, crispy crust that had a floury taste to it.  The filling was overly goopy but did not really deviate from a standard pie filling.  Because the crust was not great, but the filling was not too goopy, R&A harvested a 2.5 out of 5 apples.

As you can imagine, I was starting to get a little full from all these apple pies.  For our next stop, we made our way down the road (literally the last two places were down the road) to Aaron’s Apple House (8350 Highway 52 E, Ellijay, GA 30536).

Don’t let the label fool you, there is fruit in this, so that makes it healthy.

Aaron’s Apple House had a soft crust that was tender and added an interesting texture, not tasting like it came from a traditional pie crust dough.  The filling was good, not overly sweet, having several savory qualities about it. Much like Red Apple Barn, these pies are made offsite and distributed through the apple house.  This pie harvested a 3 out of 5 apples.

Mack Aaron’s Apple House pie has a flaky traditional crust with a dusting of sugar either before baking or right after coming out of the oven, so that it provides some texture to it and also adds hints of sweetness.  The pie crust was very good and had strong hints of cinnamon and possibly cardamon (they were subtle) but I think they were there. Because of these small touches, Aaron Mack’s Apple House harvested 4 out of 5 apples.

All told it was a bountiful harvest, but Panorama Orchards was able to take home the high score with 4.5 out of 5 apples.

Feel free to follow along and taste these pies yourselves and make your own decisions or visit some of the other apple houses in Gilmer County.  I plan to visit the ones that we were not able to get to some time soon. Hope to see you out there!